Citrusonic is a Los Angeles-based music marketing firm founded in 2010, representing music and lifestyle brands from start-up to world tour.  Some of our most popular clients include:  (Alphabetically)

Most people think it all started with Citrusonic, but Orlando Puerta (1965-2020) was a force in the music industry long before founding this powerhouse Marketing & Promotions Company in Los Angeles. It began in 1991. Following his undying passion for music, Orlando was “the” underground club promoter from 91 to 96 in LA. He threw legendary one offs and weekly parties including Citrusonic, Miss Kitty’s Candyland, Sunday School, Dish, Cha Cha Groove, Milk, Sessions, Mothership, More, Ultra Afterhours,Deep Space, The Wig Ball Part 1 & 2, and The Legends Of Warhol Ball. He introduced these now legendary DJs to the LA scene including Doc Martin, Barry Weaver, Steve Loria, Mark Farina, Derrick Carter, Johnny Vicious, and Fabian Vangeli.

Then in 1995, Orlando started to transition into indie film marketing and promotions, landing at leading Independent of that time, First Look Pictures.  Hired to promote a little indie film called Party Girl starring then unknowns, Parker Posey,  Liev Schreiver, and Guillermo Diaz,  Orlando excelled and ended up doing marketing for other niche films like Johns starring David Arquette and Gregg Arakis -The Doom Generation. He loved the film business but Music was always his true love.

In 2001, Orlando was promoted to the Director of Dance & Lifestyle Marketing and reigned for 8 years as the “Czar of dance music and remixes”…  His well trained ear and finger on the pulse of the club world propelled Warner Brothers Records to one Billboard #1 after another. In 2003 Orlando stepped up to the A&R challenge and was Executive Producer on Madonna’s Remixed & Revisited EP.

After working with nothing but a string of platinum records Orlando looked for a way to continue to grow and bring people together through music like he did when he was a club promoter.  He left Warner Brothers in 2009 and created his own boutique promotion and marketing company Citrusonic. He took his first client, Erika Jayne, and launched her on to the club scene with her #1 Billboard Club Songs Record – Roller Coaster.  Their work together secured multiple #1s including; Stars, Give You Everything, One Hot Pleasure, Pretty Mess, and Party People (Ignite The World).
He has remained on Madonna’s music team and has continued Remix A&R, Promotion, and Marketing for ‘Celebration’ [Greatest Hits], ‘Hard Candy’ Tour DVD, ‘MDNA’ Album & Tour DVD, ‘Rebel Heart’ Album & Tour DVD.

Orlando passed from an upper respiratory infection on 4/4/2020.  The outpouring of love and well wishes continues to this day as the Citrusonic team continue’s his mission of breaking and marketing music artists of all flavors. 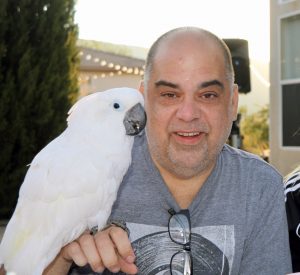